The Nipissing University Centre for the Study of Leadership and Ethics (NUCSLE) is one of seven university centres in Australia, Canada, Hong Kong, Sweden, and the United States that comprise the University Council for Educational Administration Centre for the Study of Leadership and Ethics (UCEA/CSLE). NUCSLE is a research center devoted to the support, promotion and dissemination of theory and research on values and leadership. NUCSLE was established in 2009 by Dr. Paul Begley who had returned to Canada and joined the Nipissing University faculty as a Full Professor. Paul served as Director of the NUCSLE and shepherded the centre through its formative years until his retirement in June 2011.

In 2009, Paul Begley was already Executive Director of the University Council for Educational Administration Program Center for the Study of Leadership and Ethics (UCEA/CSLE) having founded that umbrella organization in 1996. At its inception, therefore, NUCSLE became one of the consortium of seven international research centers operating as the UCEA/CSLE. This was made possible by a resolution adopted by the UCEA/CSLE Board of Trustees at a business meeting held at Penn State University during the 14th Annual Values and Leadership Conference. The resolution reconstituted the UCEA/CSLE as a multi-institution, international organization with the NUCSLE as one of its members.

The establishment of the NUCSLE generated several positive outcomes for Nipissing University and its Schulich School of Education. These included: an expanded international profile and association with the other center affiliates, access for the faculty and students to a large network of scholars in five or more countries, a new quarterly refereed journal entitled the Journal for Authentic Leadership (JALE), the existing Values and Ethics in Educational Administration (VEEA) journal, the opportunity for students and faculty to become involved in the design and delivery of an annual international conference, formal connections with multiple universities that currently operate masters and doctoral programs, facilitated access to multiple universities in support of study leaves, visiting scholar appointments, and research data collection in other countries.

The Board of Trustees for the Nipissing University Centre for the Study of Leadership and Ethics (NCSLE) is composed currently of the following members:

A number of signature events are typically sponsored by the centres comprising the UCEA/CSLE throughout the year. These include:

Journal of Leadership and Ethics (JALE)

The Journal of Authentic Leadership in Education (JALE) is a refereed journal established in January 2010. This journal is published quarterly, online and in traditional paper format. JALE is a project operated the NUCSLE. The journal is housed in the Schulich School of Education, Nipissing University, Ontario, Canada under the editorship of Heather Rintoul. JALE is dedicated to promoting and disseminating a broad range of scholarly inquiry relating to the areas of values and ethics, and their relationship to theory and practice in educational administration. The editors believe that the areas of values and ethics remain a critically important direction for research into the practice of educational administration, and is prepared to consider a wide range of disciplined empirical and conceptual works of interest to both scholars and practicing administrators. The JALE journal is accessed through the left-hand menu on this page.

At the 2011 Values and Leadership Conference in Victoria, British Columbia (September 25 to 27, 2011) Ron Wideman and Heather Rintoul announced that the NUCSLE Board of Trustees had approved the establishment of a Paul Begley Director’s Award. The award will be for excellence by a graduate student whose work demonstrates academic and social commitment to “values, ethics, and leadership” within the field of education, including but not limited to practice, policy-making, implementation, and scholarly publications.

Paul Begley founded the Nipissing University CSLE in 2009, when he joined the faculty of the Schulich School of Education. He guided the NUCSLE through its initial years of development in the role of Director until he retired in 2011. Previously, Paul had founded the UCEA/CSLE (of which the NUCSLE is part) and had served as its Executive Director from 1996 until 2011. In addition to his other contributions, Paul was a key member in the committee of Nipissing University faculty members who planned and obtained approval for Nipissing University’s first PhD program – in educational sustainability. The program began with the first intake of ten students in July 2012.

Although he had retired in June 2011, Paul continued to co-ordinate and manage the 16th Annual Values and Leadership Conference held in Victoria, British Columbia September 25 to 27, 2011. The conference was an extraordinary success with over 160 participants.

Part of the conference was a tribute to Paul, which can be viewed below. 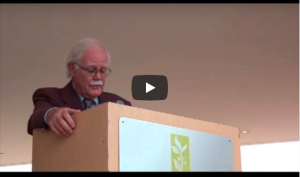 The faculty of the Schulich School of Education will certainly miss Paul; his career contribution to the study and practice of educational leadership has been enormous; we wish him the very best.